History of our house

In 2002 the "Rössle" celebrated its 175th anniversary. It all began on March 21, 1827, when the then miller, baker and innkeeper ANDREAS PLEULER and his wife ELISABETH applied for a "Schild-Wirtschafts-Gerechtigkeit" for an inn. Only half a year later the couple handed over the bakery and inn, which soon also offered overnight accommodation, to their son JOSEF PLEULER and his wife MARIA.

Their son GEORG PLEULER, also a miller and baker, took over the house on January 30, 1861, together with his wife CHRISTINE, a daughter of the then "Grundbauer". With her, a "Rössle" landlady comes from the Grundhof for the first time.

These two handed over the business to son WILHELM PLEULER on July 5, 1891, but he remained single and died in 1904. In the course of the division of the inheritance, mother Christine and brother GUSTAV ADOLF become the new owners of the inn, which is managed by Gustav Adolf and his wife CHRISTINA. With the construction of the new road, which ran in the district "Wittenbach" from 1910 on the right of the Elz, the "Rössle" was away from the through traffic.

Gustav Adolf and his wife quickly adapted to the situation: at the current location, the new "Rössle" was opened in 1914 and, as an inn with 15 guest beds, certainly already had a considerable number for the time. 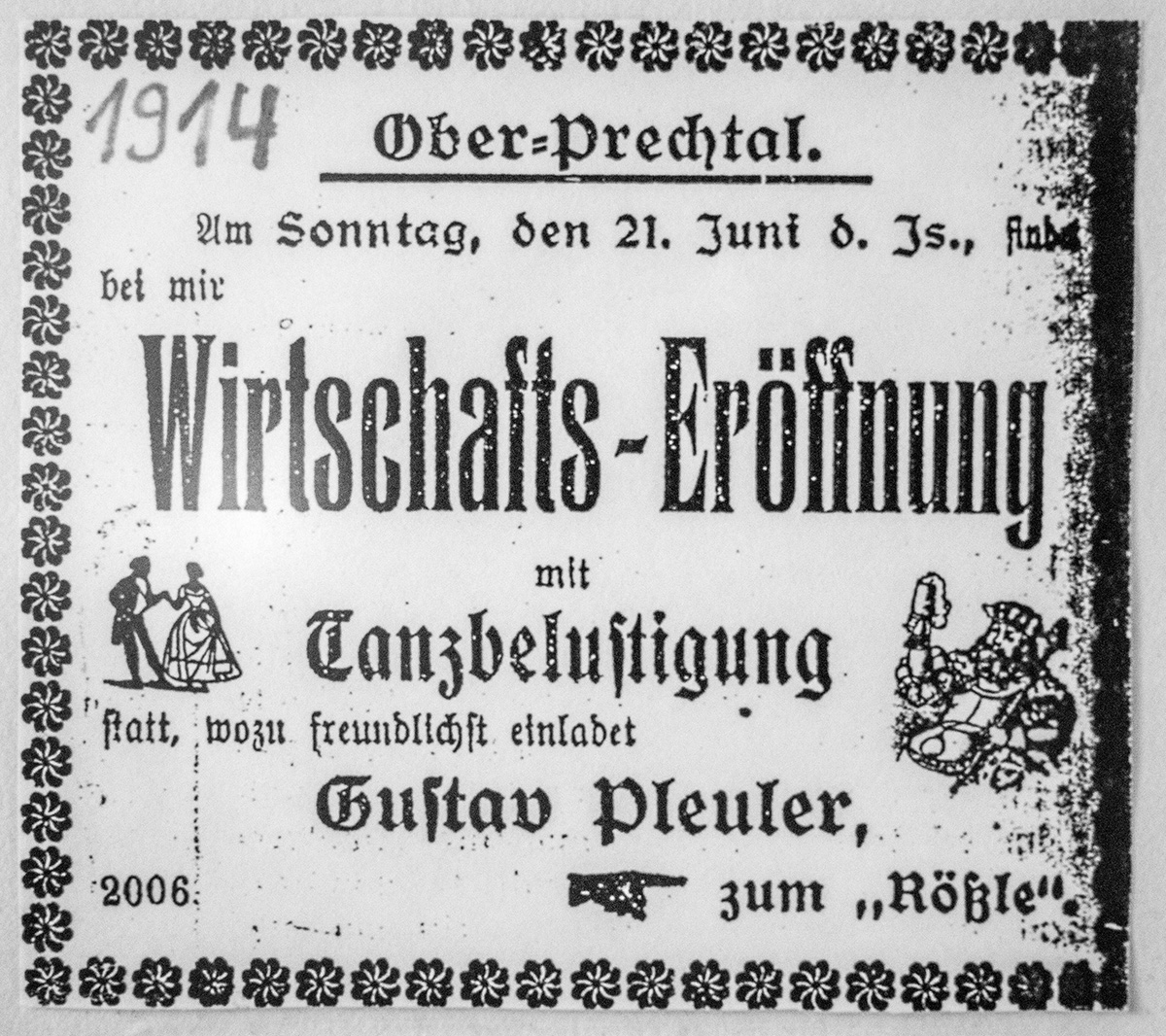 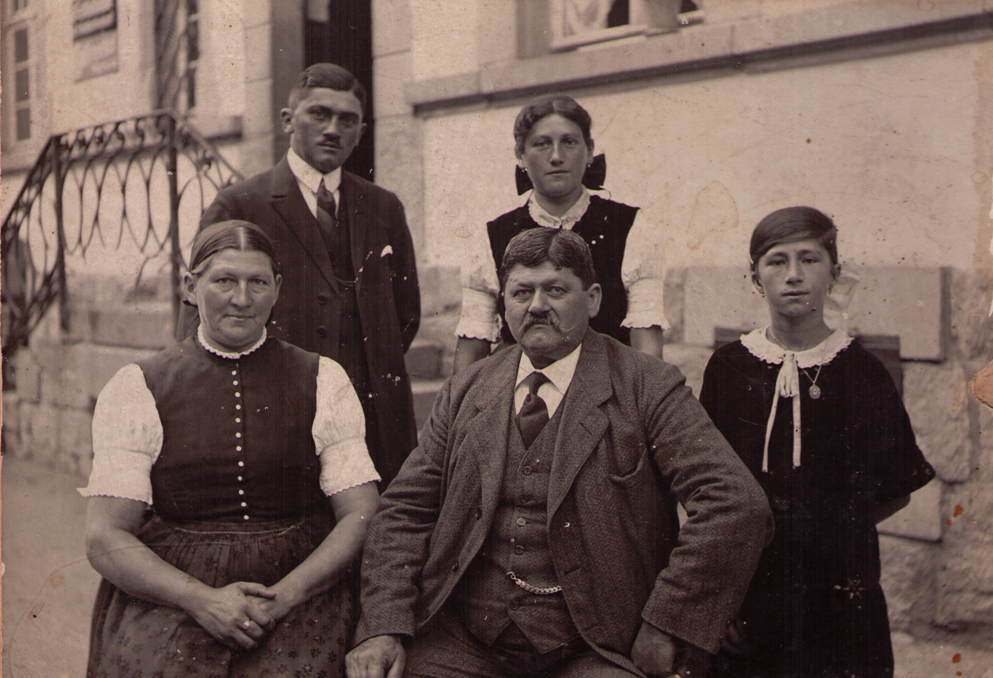 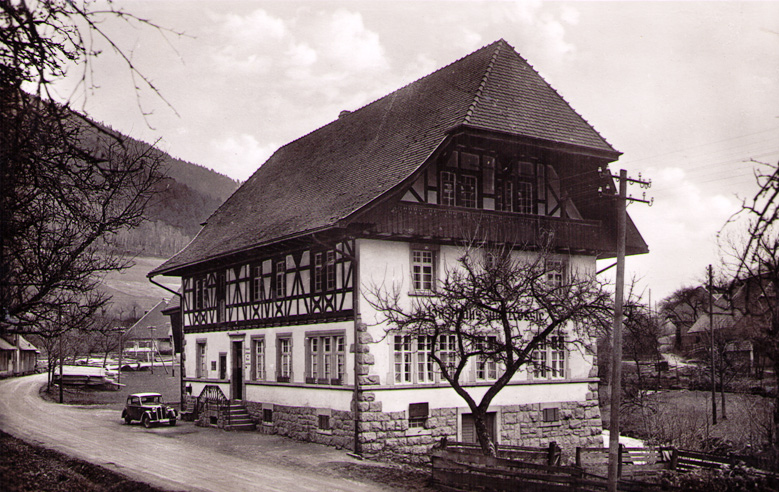 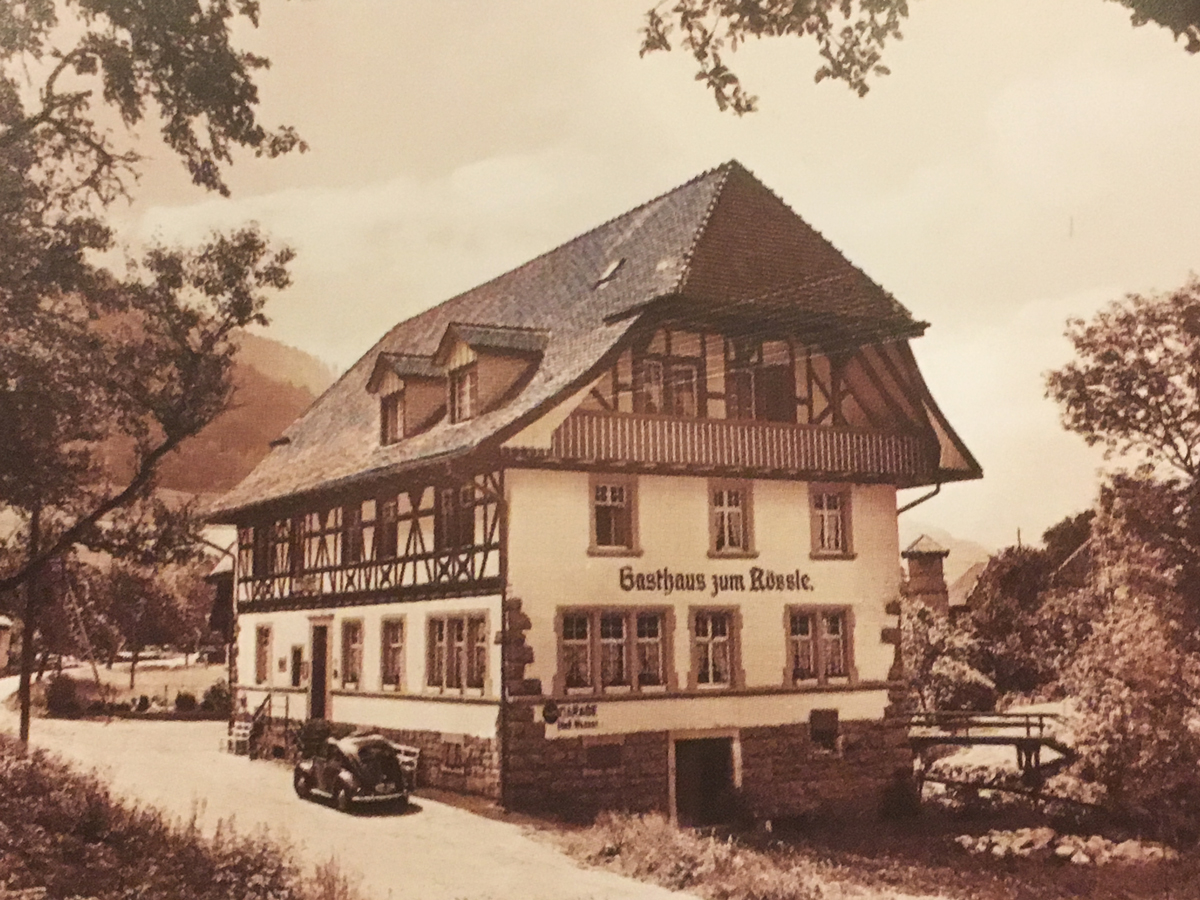 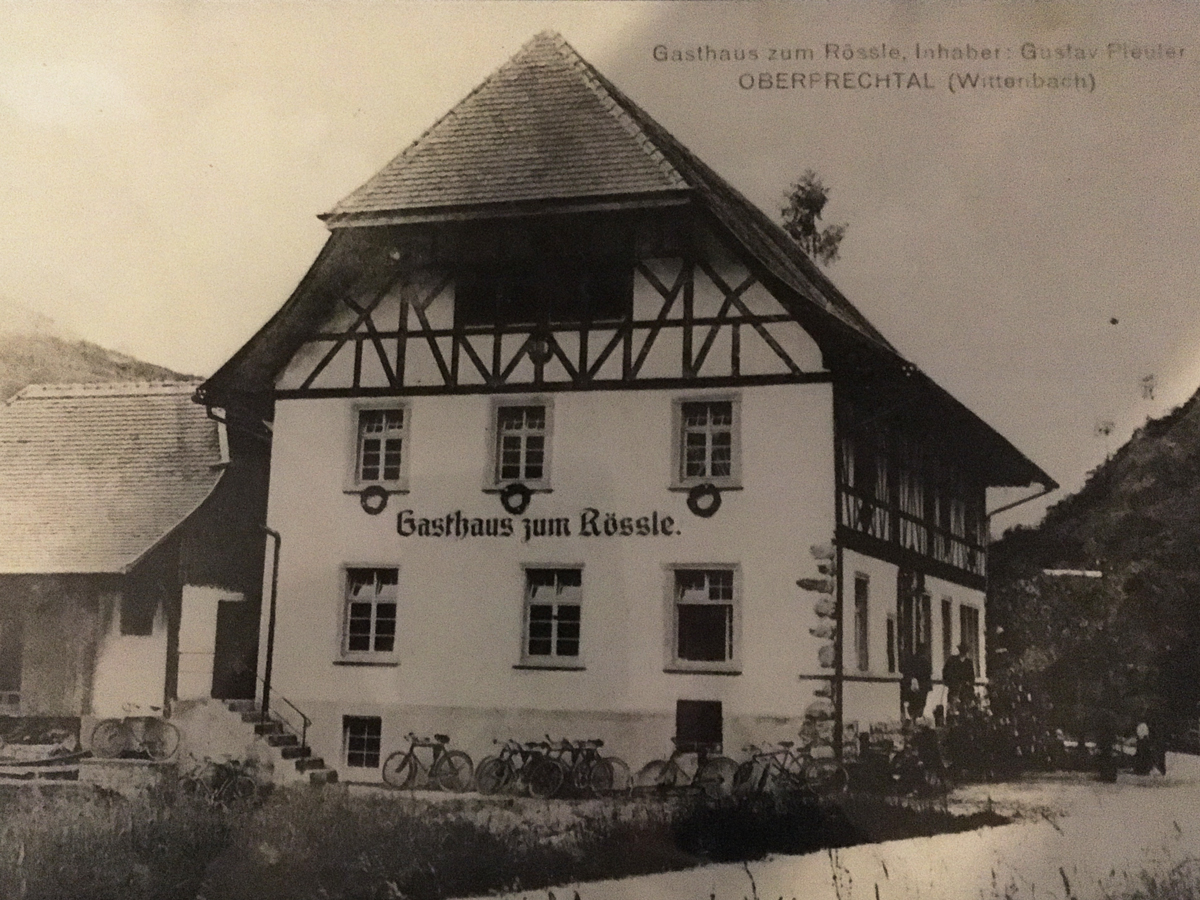 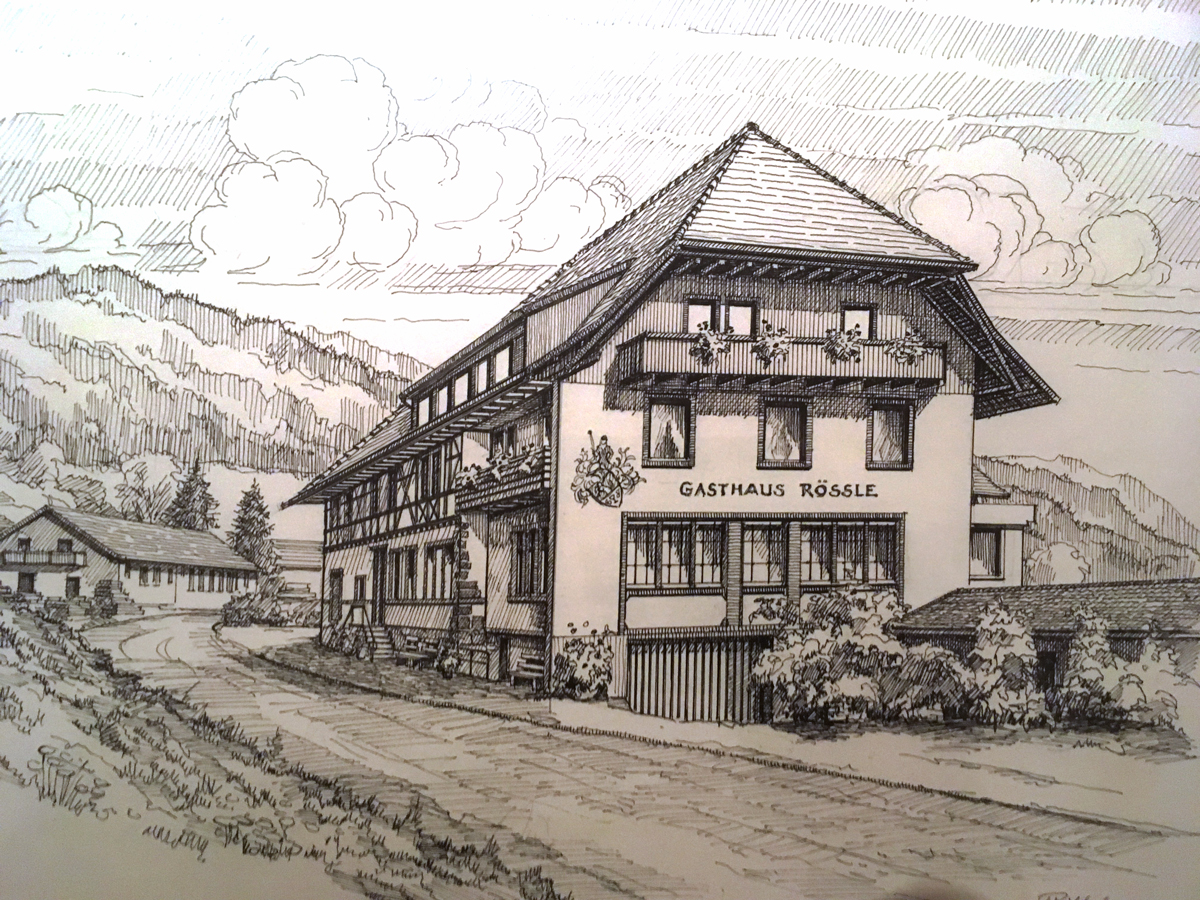 These two innkeepers were also at the Rössle when in 1922, four years after the end of World War 1, a young, then 23-year-old, rather "cocky" American journalist by the name of ERNEST HEMINGWAY stopped at the "Rössle". He expressed his memories about his experiences in the Black Forest and especially in our inn in his "49 Dispatches", a collection of selected newspaper reports and reportages from the years 1920 - 1956.

In 1934, after the Pleuler couple had run the "Rössle" for thirty years, it had to be auctioned off. Landowner Wilhelm Blum, who was also the grandfather of the current owner, bought the inn at auction and leased it twice between 1935 and 1945 to foreign innkeepers.

From 1945 to 1956, the restaurant was run by Barbara Blum, the wife of the landowner, as the concession holder, together with her five children and the rest of the family.

Then, in 1957, the VOGT era began at the "Rössle". ERICH VOGT, the master baker from Burtenbach and wife MARIA, again a daughter from Grundhof, took over the inn and opened a bakery and a grocery store on the side.

In 1959 a large terrace was added out of the valley, a shooting range was built in the basement for the local shooting club, which was converted into a bowling alley in 1963. In 1966 the terrace was raised, the dining room was built and above it more guest rooms.

In 1970 the "Rössle" was further modernized with a new sanitary facility and an extension of the kitchen. In 1975 the rear part of the house was extended. Modern guest rooms with shower and WC's were created, next to a TV room a sauna is installed.

In 1991 the restaurant including the bar is redesigned and in 1994, after 37 years, the "Rössle" is put into the hands of the son and current owner ARTUR VOGT and wife BETTINA. Of course, in this year there is again construction: the kitchen is redesigned, as well as the entrance area of the house. In 1999, somewhat to the chagrin of the "old landlord" Erich Vogt, the extension built twenty years earlier is remodeled. With the new hotel wing built for this purpose, the "Rössle" received its current appearance.